Preparations for the Tokyo 2020 Olympics Games rugby sevens competition took another step forward with confirmation of the pools for the World Rugby Sevens Repechage.

With 21 of the 24 teams already confirmed for the Olympic competition, the final qualification event that will be hosted in Monaco on 19-20 June will see the remaining two women’s and one men’s teams book their tickets to Tokyo.

In the women’s competition, the 12 teams involved in the draw have been allocated into three pools of four teams. The top two teams in each pool, plus the two third-placed teams with the highest point totals will qualify for the knockout stages of the competition. With two qualification places yet to grab, both winners in the final two games will claim their ticket to Tokyo.

Tuesday’s draw saw Colombia and France, the only women’s teams to have participated in the Rio 2016 Olympic Games, paired together in a strong looking Pool C alongside Hong Kong and Madagascar.

All four teams in Pool A will be competing at their second Olympic repechage with Russia, Argentina, Mexico and Samoa all having participated at the qualifying tournament prior to Rio 2016, the Russians having lost 19-12 to Spain in the final in Dublin. In Pool B, highest ranked Papua New Guinea will face Kazakhstan, Jamaica and Tunisia. 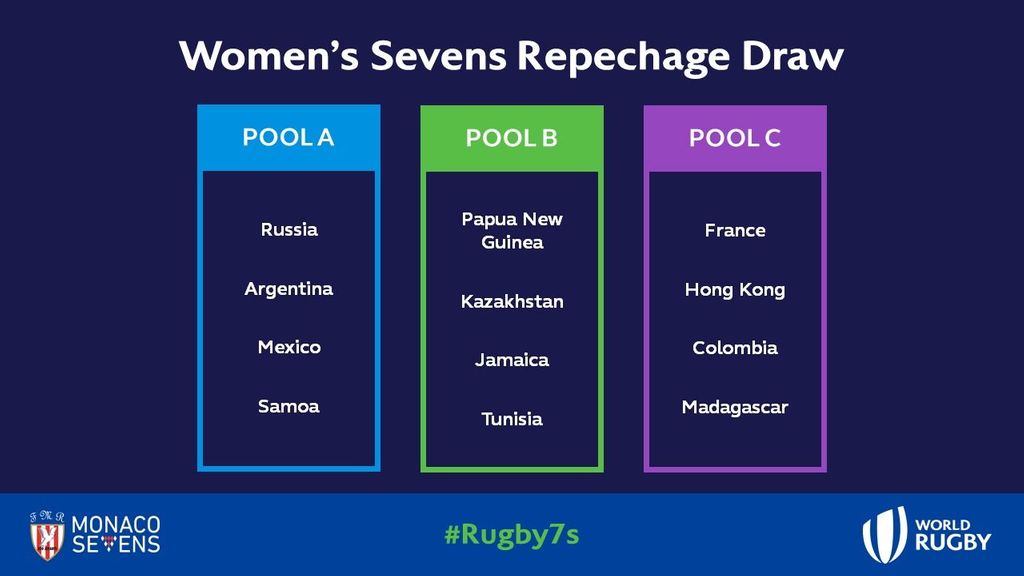 For the men’s competition, the ten teams in contention for the final Olympic qualification place have been drawn into two pools of five teams. Teams will play against all four opponents in their pools with the top two teams from each pool progressing through two knockout stages, culminating in a winner being decided in the final. 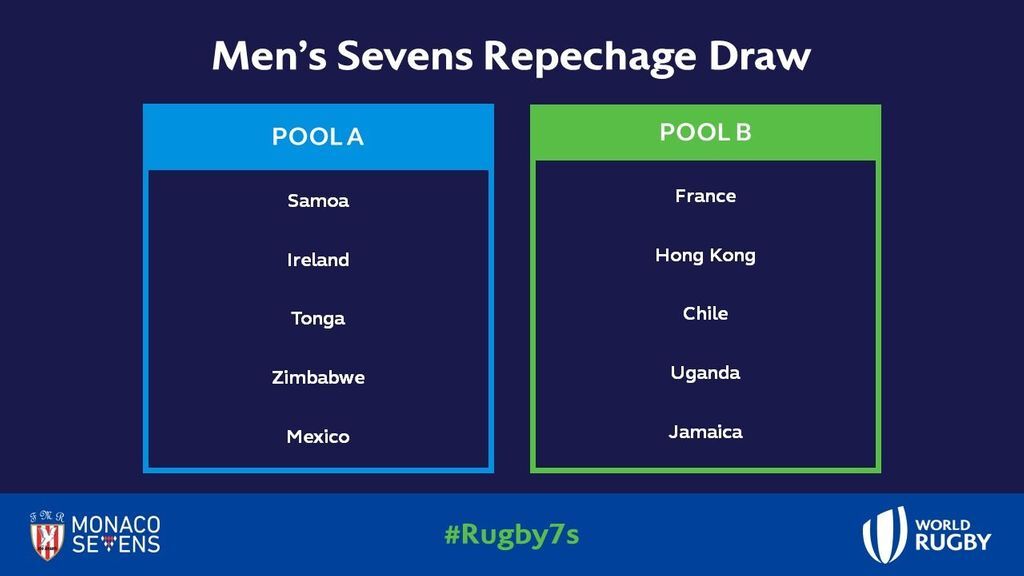 The 22 teams still in contention for a precious Olympic spot can now start to prepare for the final Olympic qualification event due to be held at the Stade Louis II in Monaco on 19-20 June.

World Rugby Vice-Chairman Bernard Laporte said: “I would like to thank His Serene Highness Prince Albert II, the Monaco Rugby Union and the Monaco authorities for putting on an excellent draw, which sets the tone for an exciting event and brings us a step closer to a fantastic showcase of rugby sevens at the Tokyo 2020 Olympic Games.

“We will now work closely with teams involved in the final qualification event to ensure they all arrive with the best-possible preparation in Monaco in June. Together with the Monegasque Rugby Union, we will continue to focus on delivering a safe, secure and thrilling event that puts the welfare of everyone involved at the centre of our operations.”

Monegasque Rugby Union Chairman, Gareth Wittstock added: “The draw has delivered some fascinating fixtures and all eyes now turn to 19-20 June and an exciting Repechage event at the Stade Louis II. Preparations are well underway, and we are now looking forward to hosting the 22 teams involved in Monaco in a safe and secure environment.”

To ensure the teams are as best prepared as possible for the Olympic Games, and thanks to support received from the International Olympic Committee, World Rugby is investing US$4 million into Olympic qualified unions’ sevens programmes and towards the costs of hosting a number of high-performance preparation events.

Rugby sevens is expected to be one of the most highly anticipated events of the Tokyo Games, following the outstanding success of Rugby World Cup 2019 in Japan, which captured the nation’s imagination with record-breaking broadcast audiences and huge numbers of new rugby fans across Japan and Asia.

The inclusion of rugby sevens for the first time in the Olympic Games at Rio 2016 had a profound effect on the sport, attracting an estimated 30 million new fans globally.